This is old news by now, but Square Enix has recently released two demos for the upcoming Final Fantasy XV, which will be released later this year. So my wife HipsterMermaid and I played through their most recent demo, the Platinum Demo! Check out the two-part playthrough below.

The Platinum Demo is actually a separate mini-story that’s more of a tech demo than anything else. Players take control of a young Noctis, the game’s protagonist, and navigate him through a series of dreams, punctuated with occasional combat and some interesting environmental effects.

The short story culminates with the player becoming adult Noctis and fighting off a massive armored boss, before getting into a car and ending the dream.

The game itself was fun enough and certainly looked pretty, but I have some…problems with this particular game. I address these in the videos below, but I’ll give you guys a quick rundown of the much-storied history of this game. 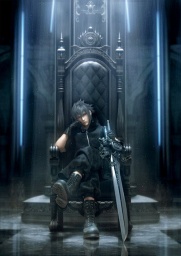 Final Fantasy XV was once known as Final Fantasy Versus XIII – back in 2006, when the first trailer for the game was released. If that seems like a long time to wait for a game, it’s because Square Enix released this trailer before the game was even in development. It was originally supposed to be part of the Final Fantasy XIII collective of games, but XIII ended up becoming its own standalone series, and including Versus XIII no longer made sense.

The game floated in development limbo for a while, with Square Enix remaining tight-lipped about any release date, or even if the game would ever see the light of day. And so, many eager fans, such as myself, then in high school, waited and waited, and gradually came to accept the fact that the game was probably not gonna happen.

At least until 2013, when Square Enix finally broke its seven-year silence, and the game was received a second debut as Final Fantasy XV. So, here we are, exactly ten years after the game’s initial announcement, and the results are…frankly a little underwhelming.

To be fair, there’s really no way that it couldn’t be. Even though the game development was technically halted for several years, we were still promised this game almost a decade ago – and many of us have moved on. I can only speak for myself here, but my initial thought when I started up this demo was “this had better be amazing”.

And the game was certainly pretty. As we’ve come to expect from Square Enix, the visuals are gorgeous, and Yoko Shimomura’s distinctive scoring style makes for just as great of a soundtrack as ever, but all in all the game just seemed a little boring. Combat is thinly spread, and limited to only a few weapons and items, and there’s really only one type of enemy that you encounter throughout the dream (two if you count the boss at the end).

I have to remind myself that this is basically a teaser of things to come, though; even though the combat in this demo was a little stale, it still has potential. It’s very reminiscent of Kingdom Hearts, and is a complete departure from traditional turn-based Final Fantasy games (previous entries have been moving in this direction for a while, though). But even though the gameplay has gone in a new direction, it still seems like Square Enix is putting a lot of effort into this one. Probably because they know how much is at stake if they screw this one up after keeping fans waiting for so long.

So although this demo felt a little lackluster, I’m still holding out hope for Final Fantasy XV. I’ve never been the biggest fan of the series, but everything that I’ve been seeing about this game makes me think that, if everything is done right, I could really enjoy it once it’s finished. The story seems intriguing, I enjoy the characters I’ve seen so far (even though the list of female characters is a little short), and the overall design seems solid. I guess we’ll just have to wait until the game’s release in September to see for sure.

For more in-depth discussion, check out parts 1 and 2 of my playthrough!